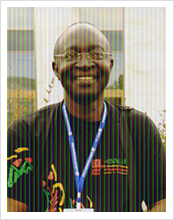 To the family, friends, comrades and colleagues of Henry Odugala

The Murder of a Shop Steward

On Friday 29th July,  SAMWU members employed by Pikitup went to their Unions Head Office in Johannesburg  to try find out what was happening after ending their month long strike earlier this year. At the entrance to the shabby building that has had millions of members subscriptions misspent on it, the workers were confronted by a team of so-called protectors, who resembled nightclub bouncers, and employed by the Union at a phenomenal cost.

Despite being orderly and disciplined, the workers were physically prevented from entering their own building, and eventually after assaulting workers, the ‘bouncers’ drew weapons and opened fire.  Three people were wounded, and one a leading shop steward was gunned down, at point blank range, and it appears, in the back as he was leaving.  The victim, a respected shop steward, eventually died on the scene before an EMS team could arrive, in front of his comrades, in full view of the public, and outside the Union Head Office that he represented. Of the two others comrades who were shot, one is still in a very precarious condition.

Earnest revolutionaries have been a familiar sight on the fringes of mass gatherings, usually handing out a pamphlet declaiming the alliance between the country’s largest labour federation and the ruling party. The ANC, goes the argument, is a bourgeois party advancing the interests of capital and for the achievement of socialism, any alliance with it would have to be broken.

This heralded dawn is well past mid-morning for the National Union of Metalworkers of South Africa (NUMSA) which together with other unions, celebrated the formation of a new labour federation. At the Workers’ Summit held the previous day, where 51 unions were represented, ten principles upon which the new federation will be established, were agreed.